[Editor’s Note: This post was written by Dennis Walker, founder of Camera Bits and creator of Photo Mechanic]

Today I am excited to announce a new metadata field we have added to Photo Mechanic: Creator’s Identity. This field contains self-asserted characteristics of the creator of the image including gender, race, culture, and other uniquely identifying terms. Similar to keywords, multiple values can be entered with no controlling vocabulary (meaning the creator can use their own terminology).

I want to take this opportunity to share with you a story of the genesis of this new field.

As the country examines itself over the inequities of opportunity for its citizens who are disadvantaged because of their race, gender, culture, ZIP code, etc., I have struggled with how I could possibly make an impact. Despite our worldwide reach, Camera Bits is a small family-based company with a small staff. It took us 24 years to amass a dozen employees. And, due to the pandemic we aren’t in a hiring mode for the foreseeable future.

Then it dawned on me that as the maker of software that facilitates the creation of photo metadata, there was an important bit of information that was missing. There are 70+ fields of metadata supported by Photo Mechanic but no way for a photographer to directly express their identity. So I thought that there should be a field for gender and another for race. Perhaps if photographers declare their identity, photo editors may seek out photographs that provide a richer representation of society.

As is common with metadata, there is typically a “controlled vocabulary” that limits the allowed values for certain fields. For gender, I thought maybe “male, female, non-binary” would be a good start. But for race I was stymied. Because Photo Mechanic is used internationally, an American view of race (e.g. from the census form) is woefully inadequate. I thought maybe just a “BIPOC” checkbox may help but even that term seemed biased towards current trends in the US. Discussions with some peers about my “great idea” did not go very well: “nobody will use these fields and they could be used to discriminate.”

Apparently I had stumbled upon some “good uncomfortable metadata” to paraphrase the words of the late John Lewis.

This topic was clearly not in my wheelhouse, so I reached out for advice to a long-time colleague Rev. Kenny Irby who I knew from the Poynter Institute. We were going to schedule a call to discuss this, but due to busy schedules and my concerns about the feedback I was getting we never connected. So I reluctantly put this grand idea to bed. Then Kenny called me out of the blue a few weeks later.

Apparently that seed I had created was germinating in Kenny’s mind. He listened to my angst about how to formally put this into metadata and my dislike for a controlled vocabulary. While there are generally benefits from a controlled vocabulary for some fields (e.g. for conformity and data collection), a true description of gender and race were simply not candidates for a limited representation. Kenny instead suggested just a single field for identity that allows a photographer to “self-identify in such a manner that affords and affirms personal authenticity.” In other words, enter what you please. Duh. Thank you Kenny!

I pledge to help drive this conversation with our contacts in the photo journalism industry. We are simply providing the tools and cannot control how or if this new metadata will be used. As this experiment progresses we will strive to provide transparency on the data and feedback we get, and ask our partners to do the same. While we encourage creators to use terms that they are comfortable with and not feel boxed-in to using socially acceptable labels, there is also a goal for some accountability which can be hindered by an uncontrolled vocabulary. There must also be an understanding that while more specificity might be better (e.g. Queer vs LGBTQ eliminates the Question), it’s up to the creator to make this decision on how far they want to go in stating their identity – or if they even choose to do so.

Respect and recognize your identity. As Kenny says, “Identity Matters!” Your unique identity is part of the narrative in your stories. Make it be heard. 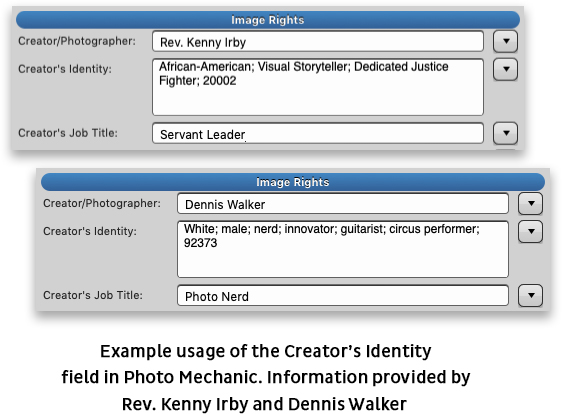 Licensing on Google Images: What IPTC fields to use in Photo Mechanic

Getting to know Kayla Brock Photography